Ulysseus Open Event in Seville: A journey from Odense to Seville by using alternative means of transport 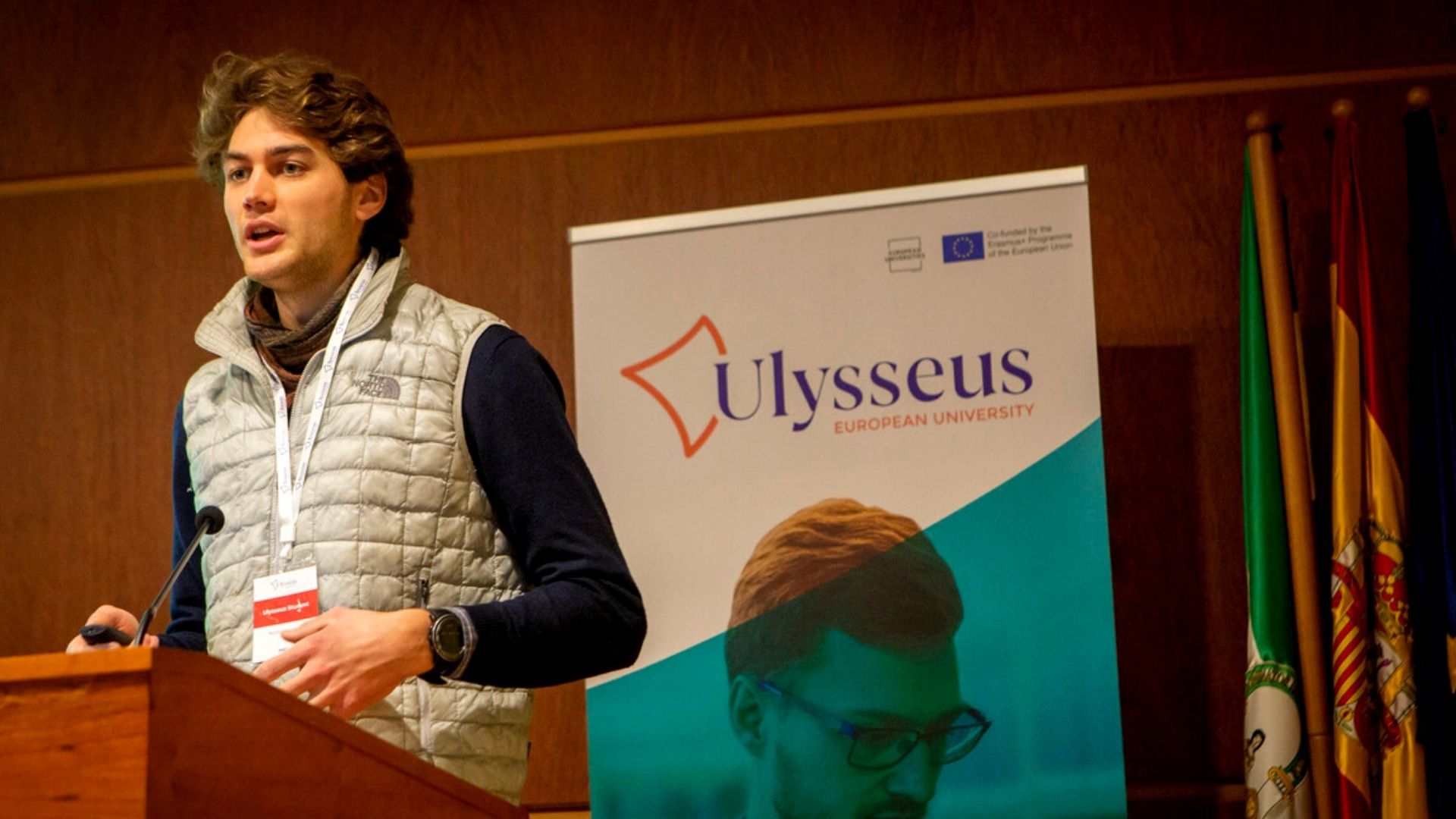 Nicolas Soehlemann, student from MCI The Entrepreneurial School and green mobility advocator, reviews his journey from Denmark to Spain for the Open Event of Ulysseus European University which took place in Seville on 2-3 December 2021. For this occasion, he travelled all the way from Odense to Seville using alternative means of transport.

When MCI sent me an invitation to the Ulysseus Open Event in Seville, I was sure not to miss such an opportunity. The event was meant to bring together the people behind this new European university, especially get the students to participate and engage with this new concept.

I joined back in February 2020 as I felt like it is a project where my input and effort could make a difference in how Europe and our academic institutions look like in the future. Therefore, I participated in the co-creation session of the joint master program on Energy, Transport, Mobility and Smart Cities (JM in ETMSC) which would be offered in Sevilla as the first of its kind.

This session gave us the opportunity to join fellow students from the different Ulysseus universities, to create the cornerstones of the above-mentioned joint master program and choose the most important aspects to be considered. I personally hope to further elaborate on the outcomes with the newly created Ulysseus community in future events as the time was, as it is often the case with such events, too short.

Apart from the co-creation session, we had plenty of time to network, get to know the Ulysseus community as well as do some sightseeing in Sevilla. When the rector of the Universidad de Sevilla had his opening speech on the first evening and welcomed all of us to our new university, I started to understand the magnitude of our journey towards a European university.

I am a strong advocate of alternative transportation methods. And as the European Union as well as Ulysseus want to advocate green mobility, I wanted to see how a train trip from the North of Europe to the very South would work.  As I’m currently in my exchange semester in Denmark, we had to plan the trip from Denmark to Sevilla and back again. The map below shows my stopovers along the way. 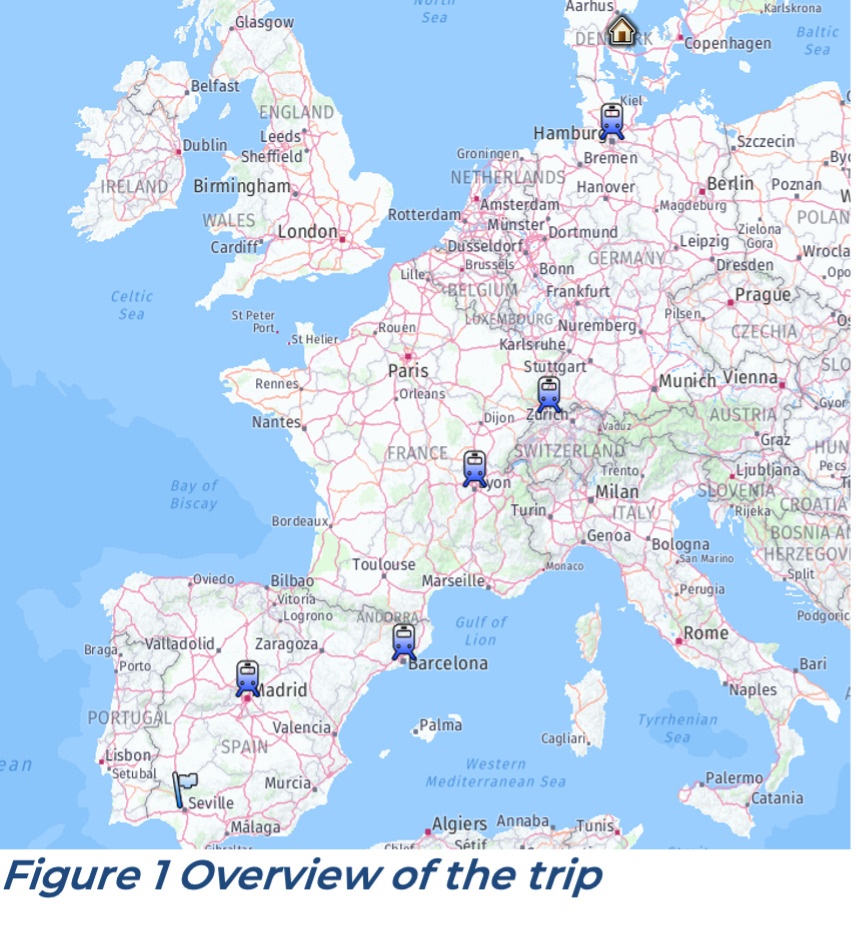 There were no major delays, and I didn’t miss a single train which was a relieve as train travel often has a bad reputation when it comes to delays and missed connections. On the way to Sevilla, I spend one night in Basel and the other in Madrid. The way back included one night train and one night bus which made a night in a hotel unnecessary and decreased the overall travel time from 2.5 days to a little below 2 days. Although, it might seem like an exhausting journey, the fact that you can move around in the train, eat on board, work at your place (often there is enough space) and go to the toilet any time, makes the journey quite enjoyable. Especially, when the focus lies on appreciating the different landscapes, people you meet during the journey and discovering the places where you have stopovers. The purpose of such a trip does not solely lie on going from A to B but also on the adventures between the two places. With this in mind and some extra time allocated for transits, one can very much enjoy such a train trip through Europe. 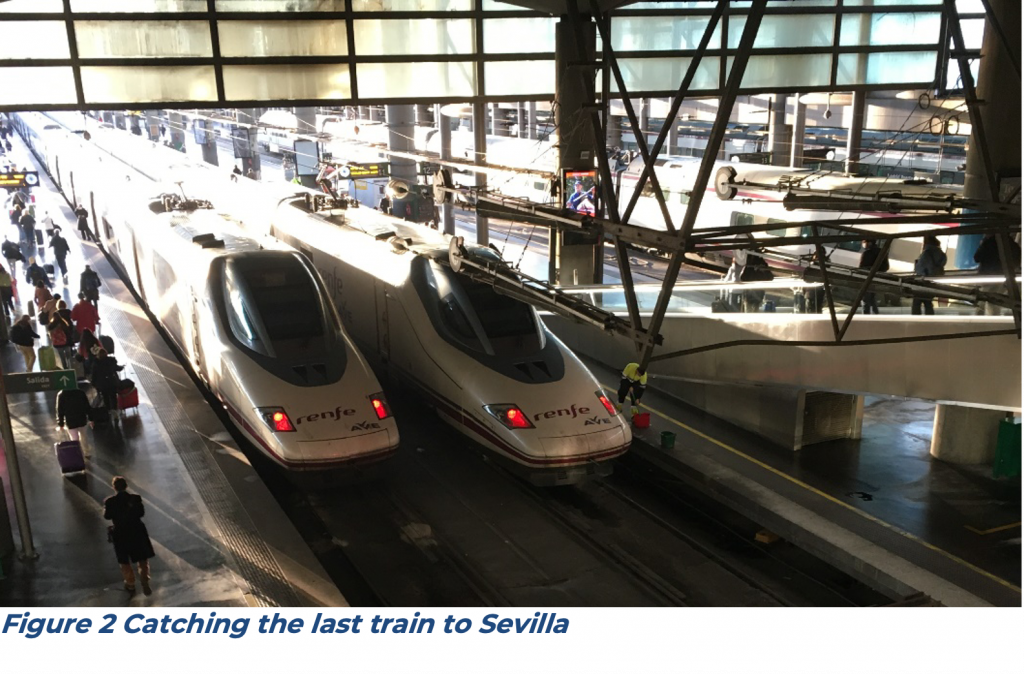 Having said that there are two major difficulties which will need to be addressed by the European Union and Ulysseus. The first one being the price. Considering that a flight might cost 250 € there and back which is already at the expensive end, a train ticket easily costs three times as much. For students this is simply impossible and thus can’t be considered even though someone might want to travel by train. And these prices are not only excessive for students but for anyone travelling by public transport for a longer distance. There are cheaper alternatives like the Interrail Ticket, but it is bound to some restrictions that make a round trip very hard. The other problem is the lack of connection of national train operators which makes the planning of such a trip a nightmare. I am very grateful that Ulysseus and MCI helped me out and organised the whole trip, otherwise I could have easily spent a whole day to plan the trip. We need a European train ticket which works for the whole union and can be used for any train or bus while providing a European platform to plan and book such a trip. If the EU and Ulysseus would like to incentivise green mobility throughout Europe, these are the main issues to consider.